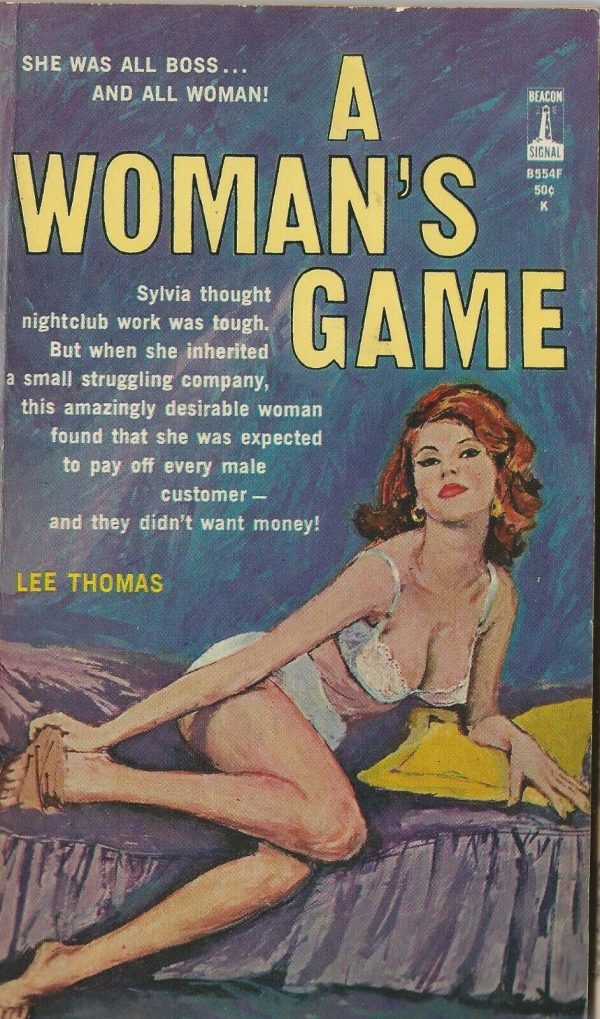 She Was All Boss… And All Woman!
Sylvia thought nightclub work was tough. But when she inherited a small struggling company, this amazingly desirable woman found that she was expected to pay off every male customer — and they didn’t want money!

Her Body Was Her Best Business Asset!
Sylvia’s Struggle To Keep Her Company Alive Depended On The Whims Of These Men:
The Plant Manager • Hank Wade swore that any woman could be had … for money. Despite his taunting, Sylvia needed Hank desperately to keep the shop going. To hold him, she had to be all boss—and all woman!
The Purchasing Agent • Sixer Marconi — strong as a bull, ugly as sin — the man couldn’t keep his eyes or his hands off her perfectly formed body. And Sylvia knew she had to have his order!
The President • Ike Tracy looked like a gentleman and lived like a sultan. The most beautiful girls in Hollywood gave themselves to him willingly. Why was it that only Sylvia could give him what he needed?
The Customer • Luke Aaronson was fat, old and lonely. Sylvia needed his business to keep her company from going under. It was worth $120,000 and she’d do anything to get it!
Nude swimming pool parties; drinking, dancing and parking with lonely older men—no one had ever told Sylvia Martin the facts of life for women in business today.
This exciting book reveals the secret deals which men make with lovely women who dare to play at a man’s game!

One thought on “A Woman’s Game”