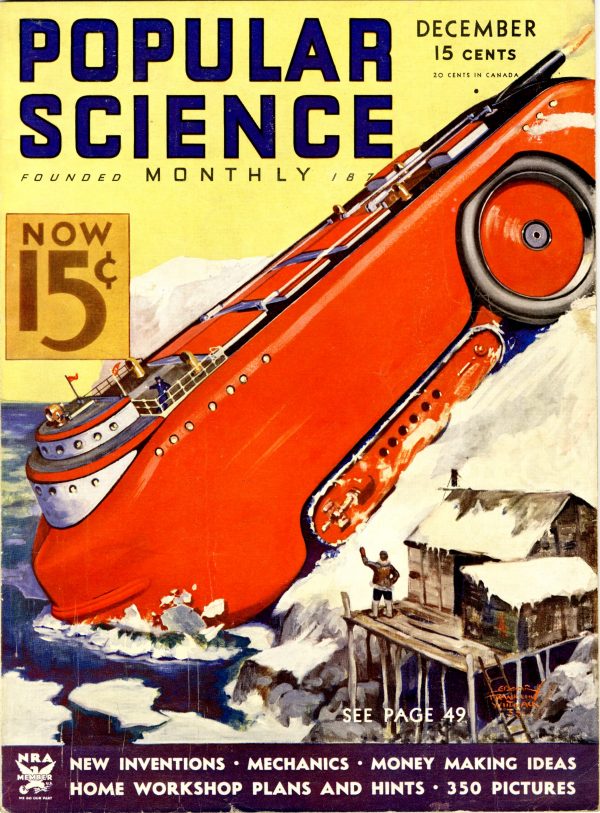 IMAGINE a motor truck so large that it dwarfs the biggest locomotive in the world — a veritable ship of the land, rolling on pneumatic tires as high as a bungalow. Fit this juggernaut, in your mind’s eye, with a boat-like hull, a Diesel motor, and an electric drive; add a propeller and rudder so that it can navigate in the water as well as on dry ground; fill its capacious hold with hundreds of tons of cargo, and send it roaring across the continent or through a wilderness to its destination. Then you will have a mental image of the 1,500-ton, amphibian super-truck that Eric R. Lyon, associate professor of physics at the Kansas State Agricultural College, predicts will be the freight-carrying vehicle of the future. To prove it feasible, he himself has worked out the engineering design of such a machine, which he calls the “navitruck” and which our artist illustrates here and on the cover of this issue.

These super-trucks will be operated on commercial highways, privately owned and operated, Prof. Lyon foresees. The roads, needing only to be sanded or graveled, can be constructed at one-third the cost of building a railway. No bridges are required; the super-trucks will ford all streams. In a real sense they will be “land ships”, since each one carries as much load as a fair-sized cargo vessel; and both the operating plans and the freight charges will approximate those of water-borne shipping.

Super-trucks will prove their worth especially in the western United States, Prof. Lyon predicts; while they also offer a means of opening inaccessible regions of Canada, Asia, Africa and South America, rich in mineral and other resources, to commerce. A sloping prow at the front of the machine will serve as an ice-breaker, or will clear the way over infrequently-traveled trails through tropical jungles.

The principal problem in projecting a super-truck, according to Prof. Lyon, lies in planning its wheels. Other features, motor, frame, and accessories such as derricks for loading and unloading cargo, offer no serious engineering difficulties, despite the huge scale of the project. To carry the vehicle’s crushing weight smoothly and rapidly, Prof. Lyon has worked out several ingenious designs for steel-shod, pneumatic tires thirty feet high, and with treads ten feet wide, revolving on gear-driven rims.

The huge pneumatic inner tube, partitioned by bulkheads to avert an explosion in case of a blow-out, is covered with alternate layers of fabric and armor of steel cable or tubing. An outer, renewable rubber tread permits high speeds on good roads. In case of a leak, a man can climb through a manhole in each tire section and make a repair. However, each tire contains an automatic electric compressor that will maintain the required sixty pounds’ pressure despite all but the severest leaks. An auxiliary endless tread amidships helps the super-truck over obstacles in its way.

Roads suitable for the super-trucks will be forty feet wide for one-way traffic and eighty feet wide for two traffic lanes, Prof. Lyon estimates. They will be easy to maintain in good condition, since the massive wheels of the monster truck act as road-rollers and pack the surface more firmly each time they pass over it. Super-highways of this type will be constructed, Prof. Lyon predicts, radiating from Denver, Colo., to Duluth, Minn.; to Kansas City, Mo.; to Galveston, Tex.; and, by way of Santa Fe, N. M., and Phoenix, Ariz., to Los Angeles, Calif. He also predicts a super-highway for the giant trucks from Canada to Mexico by way of the 100th meridian.

You can read this whole issue online, including a detailed cut-away illustration of this fantastic vehicle.