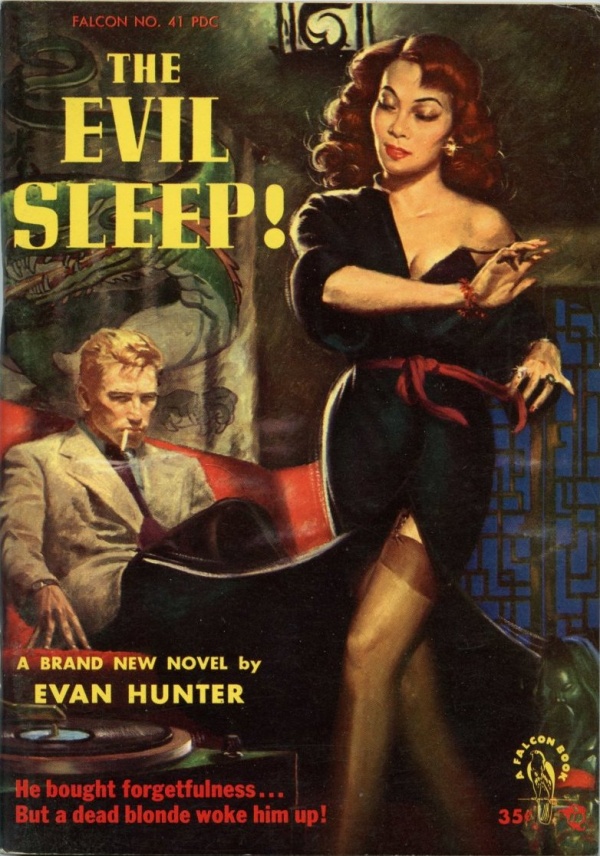 He bought forgetfulness… But a dead blonde woke him up!

Ex-Musician Ray Stone will do anything for a shot of heroin—steal, swindle, grovel, even forget at times that he’s ever been a human being. But there’s one thing he draws the line at—murder! Then one morning he wakes up to find a beautiful dead blonde stretched out beside him, a bullet wound in her chest. Ray’s dope-ridden mind works feverishly as he tries to persuade himself he has not turned murderer, too. in his neverending quest for heroin. But the more he remembers, the more the terror grows. Out of a fog of painful recollection, slowly Ray begins to reconstruct his actions over the past twelve hours in the hope of ferreting out the truth behind the brutal murder. But those twelve hours have been lost in world of drugged unreality, have become nothing more than a long, violent nightmare in which he cannot always determine what is real and what is only his own excited imaginings, now that he has been suddenly and torturously cuoff from his regular supply of heroin. THE EVIL SLEEP! is not a nice novel—but its a vivid, revealing and disturbing novel—one that will stay with you long after you have put it down, a story that rips the lid off a world of sickness and despair that most people fortunately remain in ignorance of throughout their lifetimes. You will wander through a horrible dream-world with discomfort and dismay—revulsion too, perhaps—but above all, with compassion, as the author brilliantly describes Ray Stone’s struggle against illness in his fight to find out what, during his long nightmare, really did happen—in order to prove what did not!