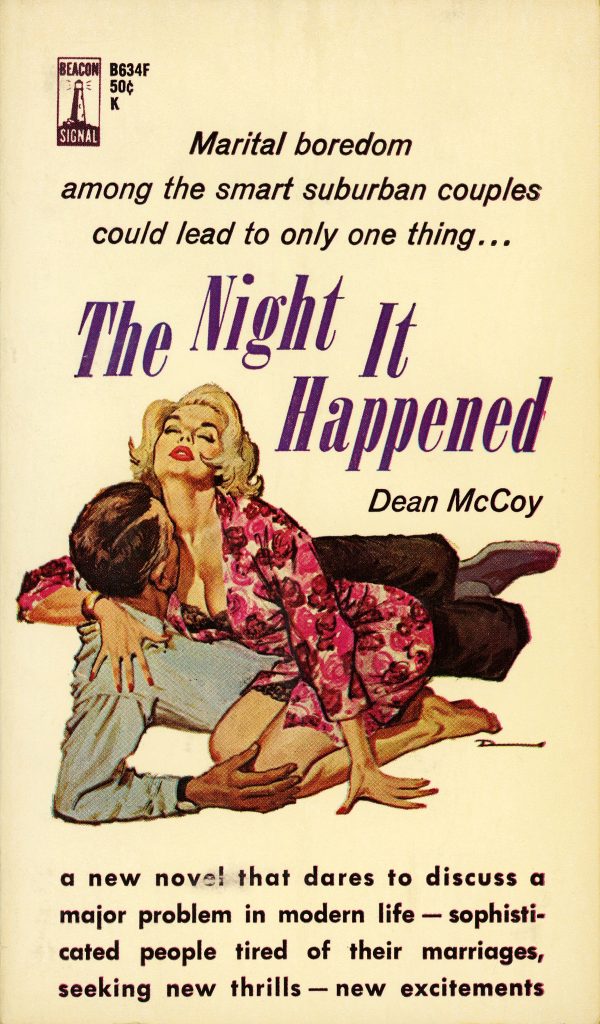 Marital boredom among the smart suburban couples could lead to only one thing…
A new novel that dares to discuss a major problem in modern life — sophisticated people tire of their marriages, seeking new thrills — new excitements

The Event Was The Social Climax Of The Year. All The “Best” People Were Scheduled To Attend. Distinguished Ticket Holders Included Two Neighbors With Desire For Each Others’ Wives, A Pair Of “Different” Women, A Wealthy Playboy And His Call-Girl Fiancée… And A Few Hundred Dissipated Pleasure Seekers!

The First Couple
Mike and Diana Eaton were strictly city people. They didn’t know what to do with themselves when the sun set on their new suburban ranch house. When boredom diminished Mike’s bedroom ardor, Diana received potent advice from her next door neighbors!

The Second Couple
AI and Ginger Hight bought their house in the suburbs only after giving the prospective neighbors a careful once-over. They were particularly attracted to the Eatons … and for good reason.

The Third Couple
Letitia Granger and Madge Henry had an unnatural attraction for each other not understood or appreciated by anyone but them.

The Fourth Couple
Patsy Straight decided to start a clean, fresh life when she became engaged to wealthy Perce Forrest. But Perce didn’t really want her to give up her life as a call girl!

A Major Novel! It Fearlessly Reveals The Shameless Lowering Of Morality In Modern Suburbia