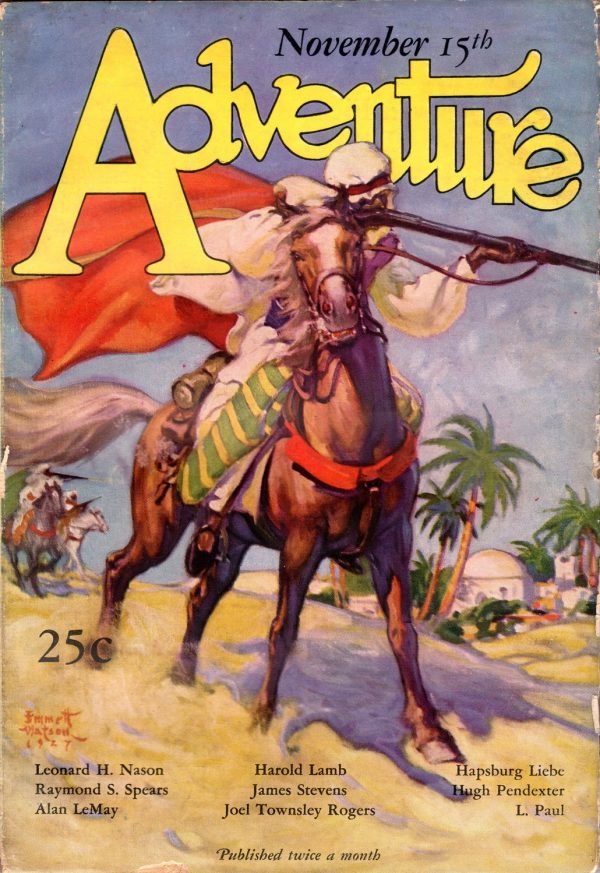 I hate not knowing what story this cover is illustrating. If you know, please tell me.

[UPDATE] Jim writes to inform us:

It illustrates part of the Harold Lamb novelette “The Road to Kandahar.” I just read it a few days ago. It takes place in 1619 in the middle east. The story follows a warrior turned physician who travels to Kandahar. He joins with Moguls who become allies with a Pathan tribe who attack a Persian camp outside Kandahar. A princess he encounters in Kandahar turns out to be a Persian spy. The leader of Kandahar disguises himself and poses as a prophet to extract gold from the Pathans. The cover appears to depict the surprise attack on the Persians by the Mogol and Pathan forces that averts the takeover of Kandahar. I was struck by the similarity of the places and tribes to the continuing strife in the middle east today.

The “Road to Kandahar” is included in a collection of Harold Lamb stories called Swords from the Desert published in 2009. He infuses the story with cultural, geographic, and tribal details. I read that Harold Lamb served in the OSS during WW II and later was an advisor to the State Department suggesting that he had extensive knowledge of the area. I wonder how the U.S. policy toward the middle east might be different if it were informed by such history of tribes that have been at war for 400 years.