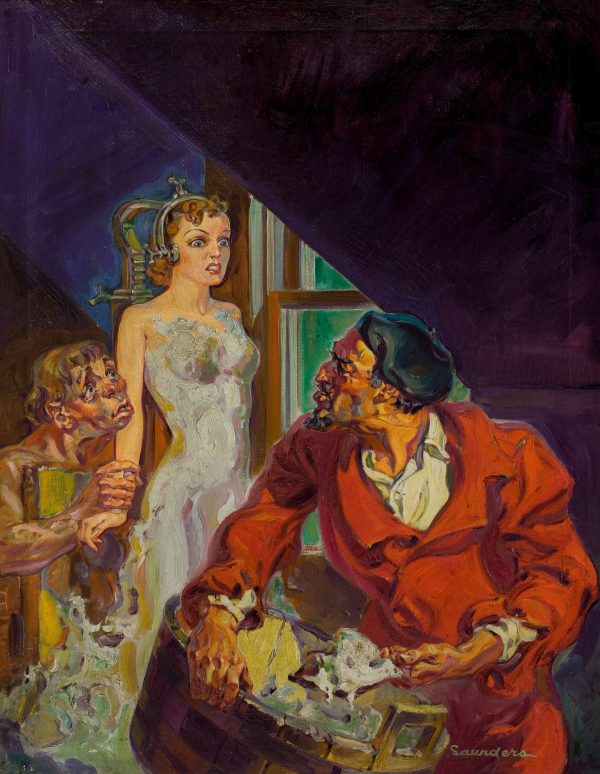 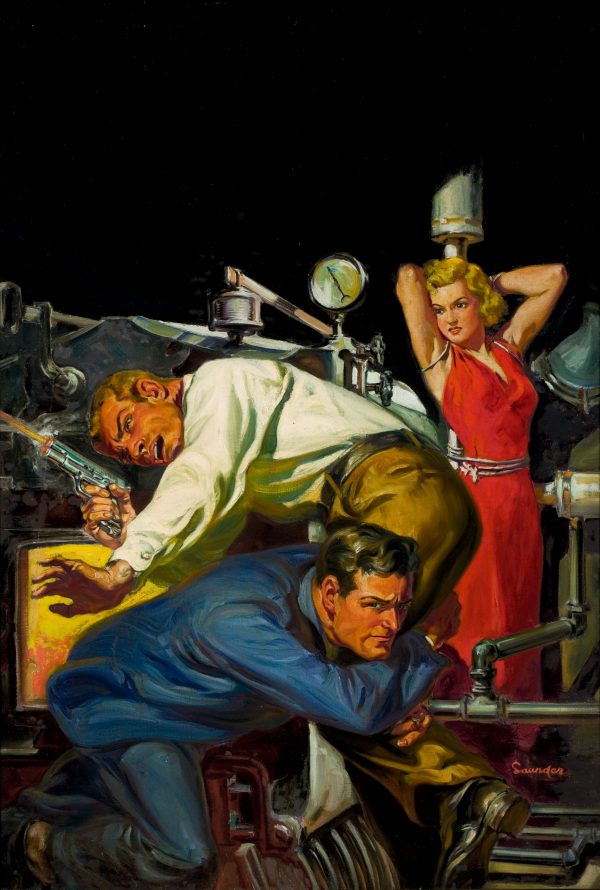 The Living Statue and Shootout at the Steam Pipes

When I could not find any information about where these paintings were published, I wrote David Saunders, who is the leading expert on his father’s work. David immediately wrote back and told me that they had never actually been published, which makes me feel better about my research skills.

I am very familiar with these paintings ever since I was first shown photographs of them by Charles Martignette around 1998, at which point he was trying to arrange to trade them to me in exchange for other original art I own by my father. He stated to me that they were a part of a large collection of original paintings that he owned, which had all come from DELL Publications. He showed me photos of all the other paintings as well, and sure enough I recognized all of them as actual cover art from DELL publication pulp magazines. I helped him to identify the publication dates and titles for all of the other original paintings, but I was not able to find any examples of these two paintings having ever been published, so I told him at the time that they were “unpublished works.” By that time I had already spent a lifetime documenting my father’s art. I had thoroughly identified all known published examples of the art of Norman Saunders. Because of my expertise it was a surprise to see these two “unpublished” paintings, which were entirely unknown to me. They are clearly identifiable from their unique style as being from among the first group of paintings Norman Saunders designed with the intention of breaking into the pulp magazine industry in 1934. This was before his all-important study “master class” with Harvey Dunn in NYC at the Grand Central School of Art, where he received his advanced training from 1935 to 1938. So these are from an earlier period, before he was an accomplished master of oil paintings, when he might be described as a semi-professional illustrator of a student grade. He had already produced thousands of black and white interior story illustrations for Fawcett Publications in Minneapolis, but he had only painted a few full-color magazine covers. He moved to NYC in the summer of 1934 and he struggled to break into the pulp magazine industry as a cover artist. My father later told me that the first publisher to give him a break was George Delacorte at DELL Publications. Dad told me that Delacorte himself was interested enough to buy “an arm-load of sample covers.” Sure enough, many of the earliest published examples of my father’s cover art appeared on DELL pulp magazines, ALL DETECTIVE and BLACK BOOK DETECTIVE. I have made a great effort to inspect every single issue of every pulp magazine published by DELL from that time period, many of which are available for study in microfilm format at the US Library of Congress in Washington DC. I have inspected every such magazine and I feel confident to state definitively that neither of these paintings were ever published on the covers of any pulp magazine.

I suspect these were among the “arm-load of sample covers” my father sold to George Delacorte in the Fall of 1934 or Winter of 1935. These are the only two that have since surfaced from a collection that Charles Martignette bought from an unknown source from the archives of DELL Publications. All of the other examples that Charles Martignette showed me came from BLACK BOOK DETECTIVE circa 1935 to 1937. The evidence strongly suggests George Delacorte bought an “arm load of samples covers” from Norman Saunders and proceeded to use the finest examples on his covers of the pulp magazine BLACK BOOK DETECTIVE, but he never chose to print these. Incidentally, my father also told me that his earliest cover paintings were sold for only $25 each, so at that rate DELL could afford to buy more than they really needed to use.

I hope this background info helps you to better appreciate these unpublished student-grade paintings for what they are.