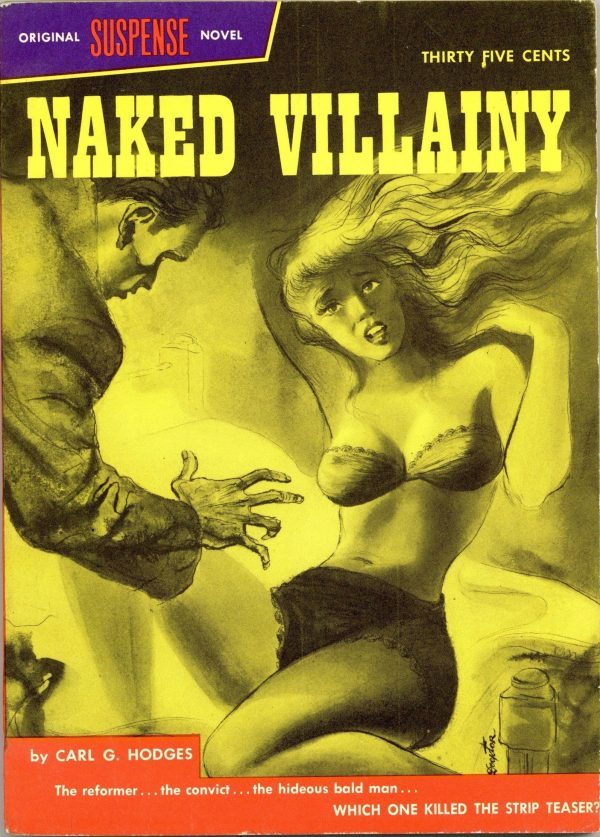 The reformer… the convict… the hideous bald man… Which One Killed The Strip Teaser?

From the moment he walks in on the almost nude figure of Inez Fischetti, things happen fast to young Wick Davis. You can’t blame him for taking an interest in the girl’s figure—for a cop, Wick is pretty human. But just as he starts getting to first base, someone dumps a ton of gun on his scalp. When next he sees Inez she wears hair of a different color, though the same old black panties . . . And she’s completely dead! Wick goes into a dangerous chase after the sissified Otto Kroll, the person last seen with Inez. He also chases Otto’s bewitching sister, Ruth. Then his nose for nudity leads him to Maria Malambri, another scantily dressed lady, who knows the hiding place of the missing Clarendon emerald and the sinister bald man without a neck. Wick manages to catch up with old Baldy in a dark hallway, gunning it out with him in a climax as filled with surprises as it is with hot lead. Among the surprises is Maria, in clothes this time. But Wick, true to form, evokes tender solace, as well as the solution to three murders, from the fetching young lady named Ruth.