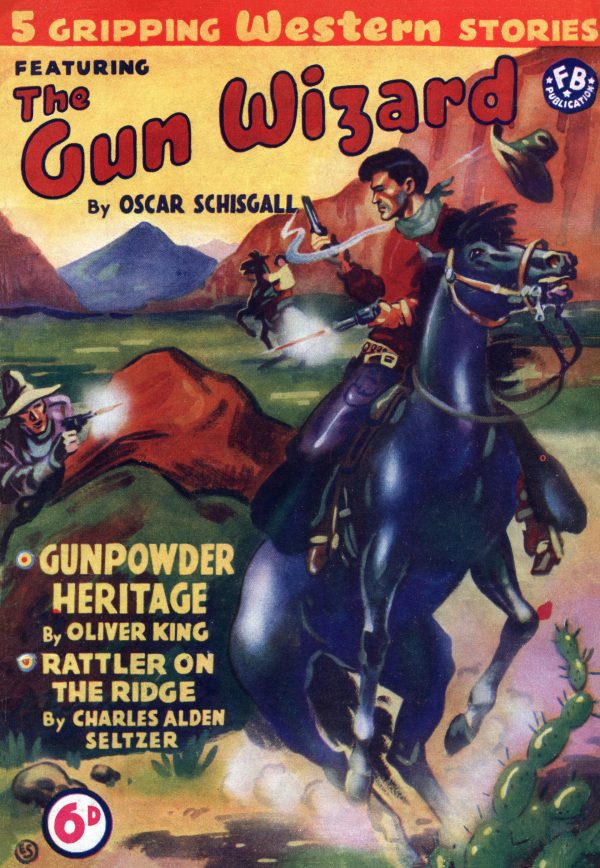 This is an Australian reprint digest published by the Firchett Brothers, undated and with no copyright information. It’s called “Five Complete Western Stories” on the first page, but the front cover says “5 Gripping Western Stories”. The War Bonds ad on the back cover puts it between 1939 and 1945.

The stories are all reprints, listed below with their earlier (although not necessarily first) publications noted.

The Gun Wizard by Oscar Schisgall (Thrilling Adventures, April 1936)
The Man Who Rode Purgatory by Charles Alden Seltzer (The Outing Magazine, November 1909)
Gunpowder Heritage by Oliver King (Dime Western, April 1st 1935)
Justice While You Wait by Owen Oliver (The Royal Magazine, June 1910)
The Rattler on the Ridge by Charles Alden Seltzer (originally published as “The Man on the Ridge” The Outing Magazine, February 1912)

The entire issue can be downloaded here