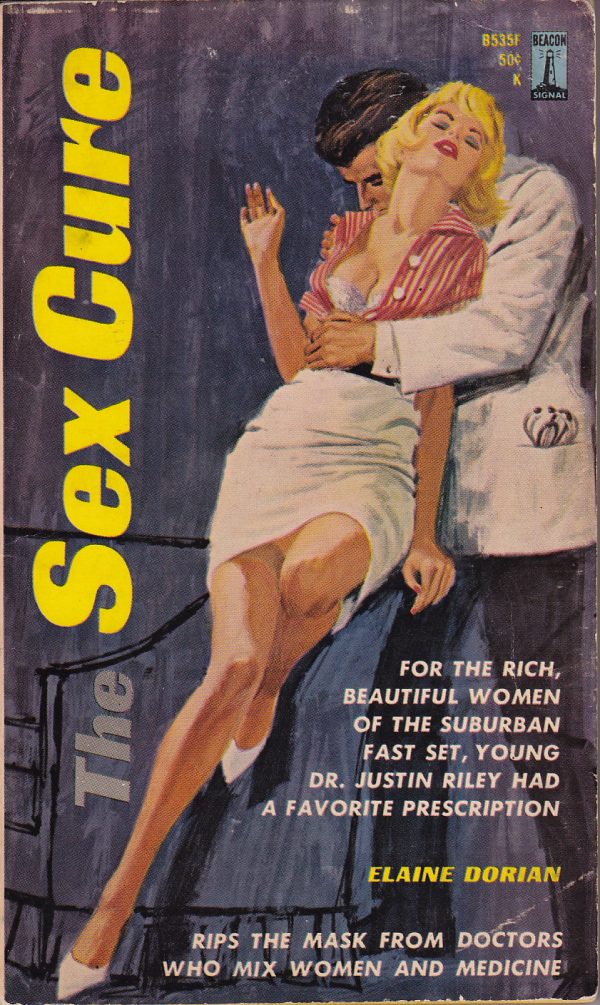 For The Rich, Beautiful Women Of The Suburban Fast Set, Young Dr. Justin Riley Had A Favorite Prescription

Rips The Mask From Doctors Who Mix Women And Medicine

You Will Be Shocked. You May Be Angry. But You’ll Hang On Every Word Of This Startling, Fast Paced Story Of A Doctor Who Violates His Oath As Casually As He Violates A Woman.

“If you’ll just open the front of your dress,” Dr. Riley said coolly. Socialite Misty Powers smiled and began to take things off, everything. Her husband was away and it seemed a good time for one of Dr. Riley’s “special treatments.”

In The Sex Cure you’ll meet suave, young Dr. Justin Riley who’s ready to take sex wherever he can find it. And he’s able to find it almost everywhere in rich, fashionable suburbia. Many a pretty patient learns that Justin has some unusual and shocking remedies in his medical bag of tricks. Even a young nurse in Justin’s office finds herself on the examining couch, and she doesn’t have as much as a headache.

Then a beautiful, innocent young girl enters Dr. Riley’s life. That she is innocent does not stop Dr. Riley; it only whets his insatiable appetite. Cynically, ruthlessly, he leads her down into the depths of shame. Then the incident occurred which brought the walls and roof down on the man who thought he was outside the laws of both his profession and decency.