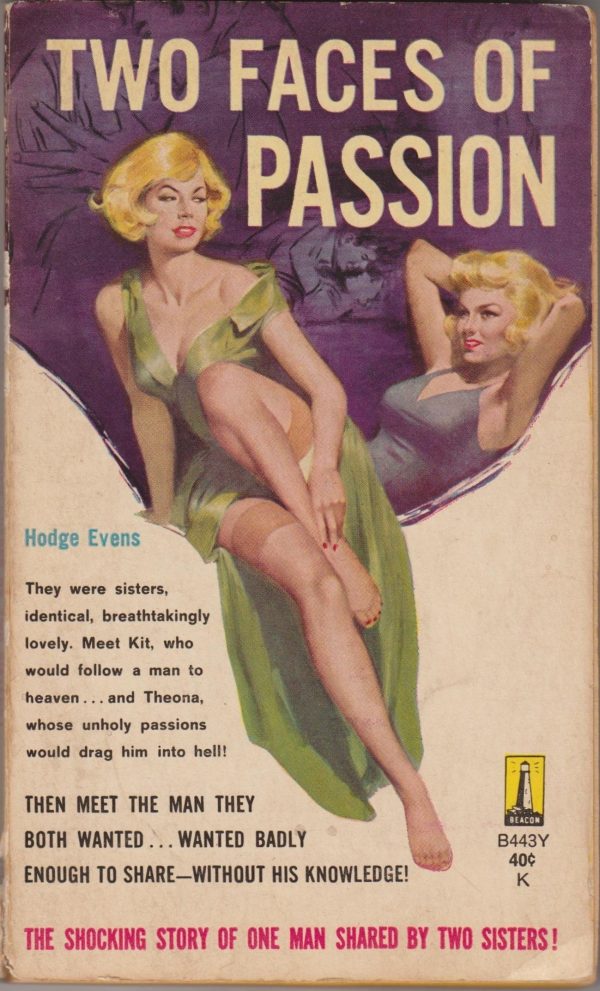 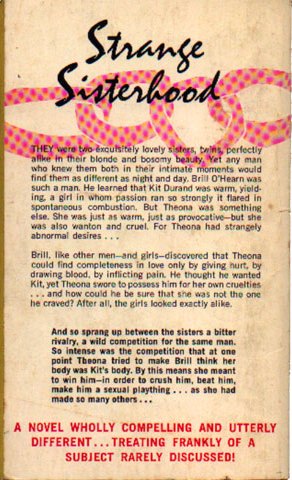 This is a nice cover, with some great artwork by Ray Johnson, but the text is what really makes it awesome!

They were sisters, identical, breathtakingly lovely. Meet Kit, who would follow a man to heaven… and Theona, whose unholy passions would drag him into hell!

Then Meet The Man They Both Wanted… Wanted Badly Enough To Share—Without His Knowledge!

The Shocking Story Of One Man Shared By Two Sisters!

They were two exquisitely lovely sisters, twins, perfectly alike in their blonde and bosomy beauty. Yet any man who knew them both in their intimate moments would find them as different as night and day. Brill O’Hearn was such a man. He learned that Kit Durand was warm, yielding, a girl in whom passion ran so strongly it flared in spontaneous combustion. But Theona was something else. She was just as warm, just as provocative—but she was also wanton and cruel. For Theona has strangely abnormal desires…

Brill, like other men—and girls—discovered that Theona could find completeness in love only by giving hurt, by drawing blood, by inflicting pain. He thought he wanted Kit, yet Theona swore to possess him for her own cruelties… and how could he be sure that she was not the one he craved? After all, the girls looked exactly alike.

And so sprang up between the sisters a bitter rivalry, a wild competition for the same man. So intense was the competition that at one point Theona tried to make Brill think her body was Kit’s body. By this means she meant to win him—in order to crush him, beat him, make him a sexual plaything… as she had made so many others…

2 thoughts on “Two Faces Of Passion”